I’m taking a little break from the patchwork to show you another (re)purposed project – an apron made from an old table runner, a pillow case, thrifted pair of linen capris, and some leftover muslin.

How’s that for a (re)purposed project?! 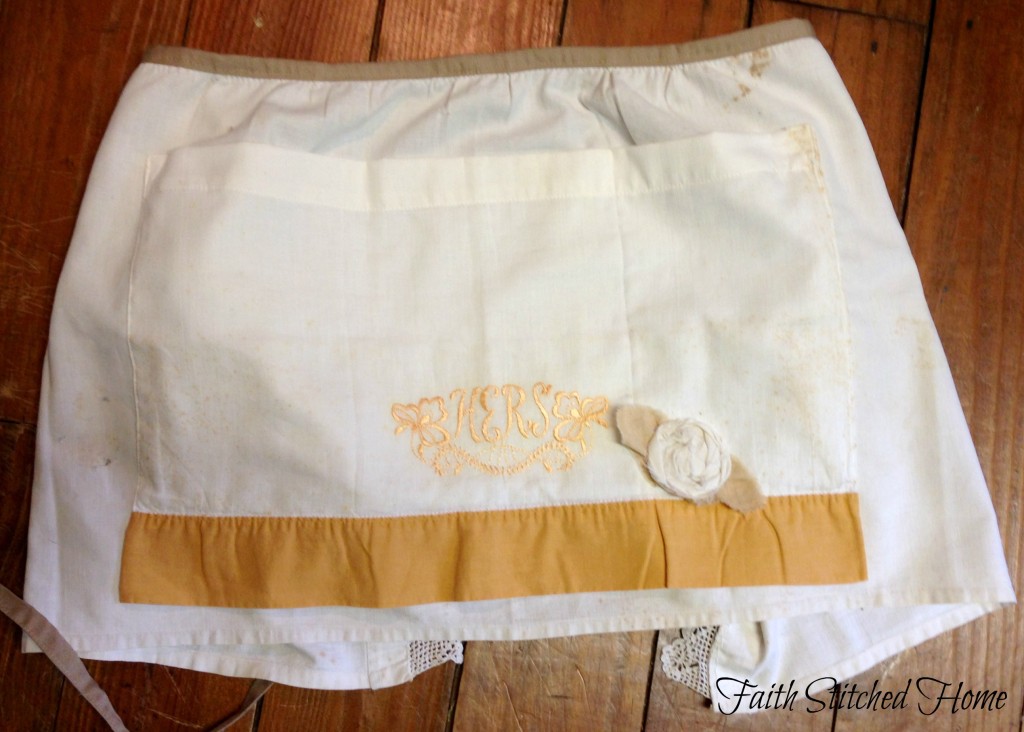 I’ve mentioned that my friend gifted me with stash from her elderly mother’s sewing room but also from her house in general. Two items in that stash was an old table runner with hand crocheted trim along each end complete with rust stains and all and a pillowcase embroidered with “Hers”. The “His” pillowcase was missing.

When I made the apron, I was preparing to participate in my first craft fair. I wanted an apron with lots of storage for a notepad, pencil, business cards, and change. Of course a table runner was the answer! Of course! Yea, the right side of my brain operates on a different plane sometimes.

So here’s how it came together. I had a pair of linen capris I had found at a thrift store for a buck and a half that I cut two long strips from for the ties. Those were stitched along the side of the table runner.

The “Hers” pillowcase was all tattered and torn, however the section with the embroidery was still in pretty good shape. I cut it half to make the pocket. The pillowcase was stitched across the center of the runner and two more seams were stitched to create three pocket sections. The pillowcase opening was clearly a different cotton content than the case itself because the case had shrunk and the trim across the end was all ruffled, so what was I to do? Let it be a ruffle! 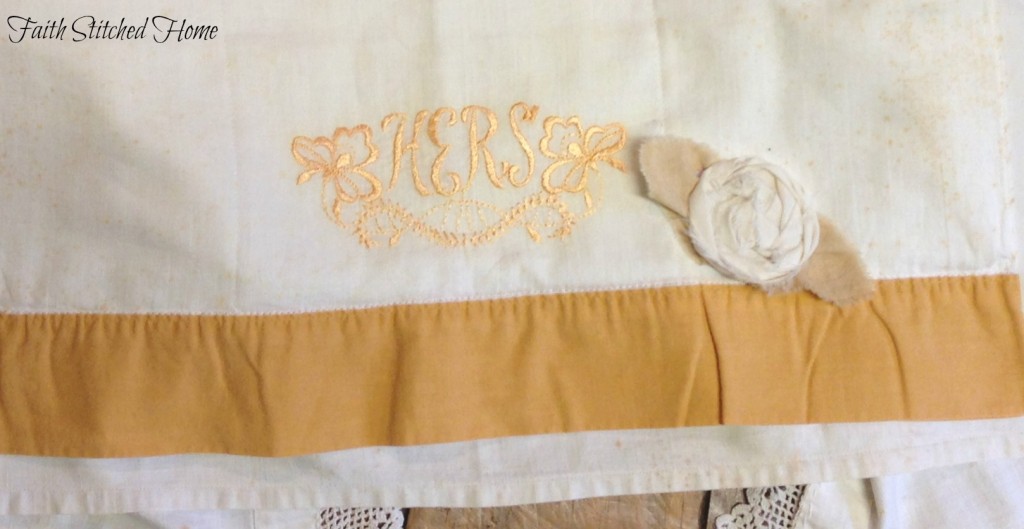 Using a couple of small scraps of both bleached and unbleached muslin, I made a flower and leaf embellishment to stitch on the pocket. 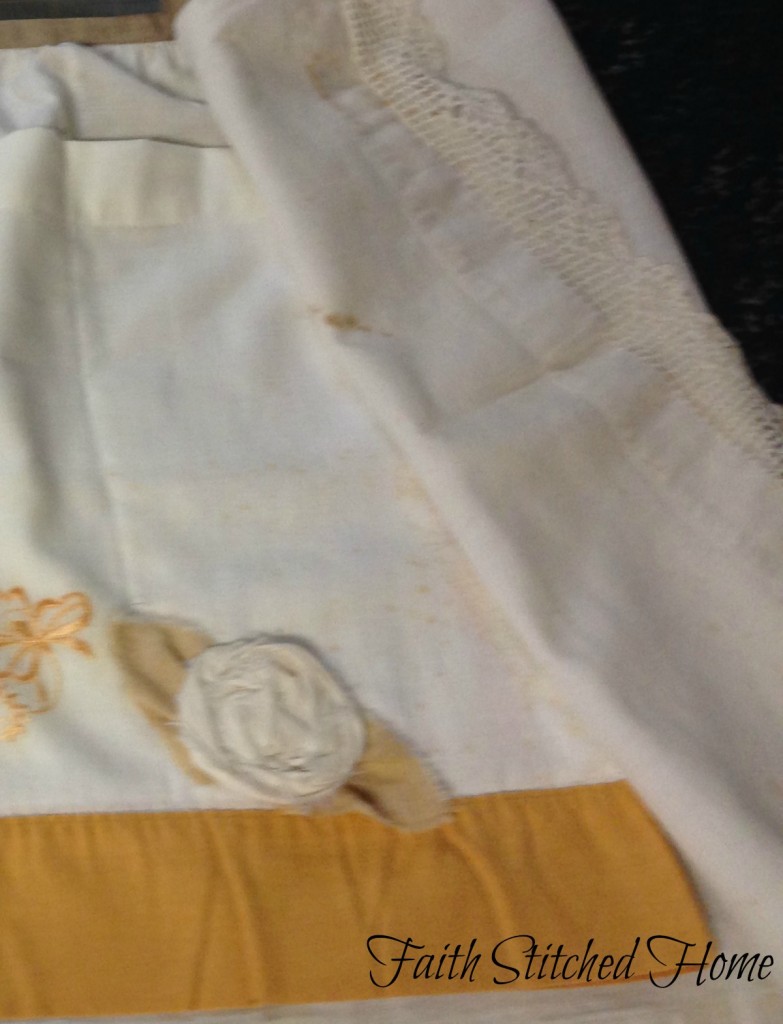 The pockets were very functional for the fair. They are deep and roomy – plenty of space for all the items I needed on hand. 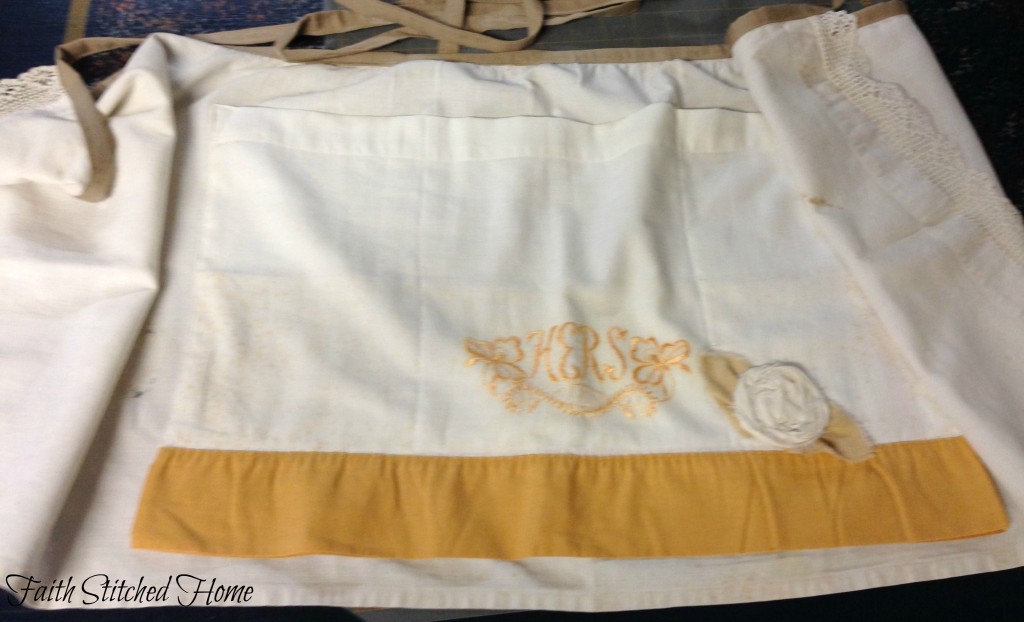 So what do you think?

Can you believe I used so many different items that have nothing to do with their original purpose?