Today we celebrate Memorial Day – a day to honor our veterans who gave the ultimate sacrifice for love and freedom of country and countrymen.  Their bravery and courage have provided one of the greatest blessings one can have as an American.

As we begin a season of patriotic holidays, I thought I would make a simple applique banner to celebrate this great country.  I happened to have a little package of 5 denim pennant banners with grommets already in each corner, so I am going to make use of them.  You know my motto – if you’ve got it, use it!

I could easily reuse scraps from some old jeans and would if I were going to machine applique the motifs. These purchased denim banners are a little flimsy with the thin denim being stitched onto cardstock. But I really don’t want to go to the trouble of putting grommets in real jean pennants and I like the look of the purchased ones just fine for this project. 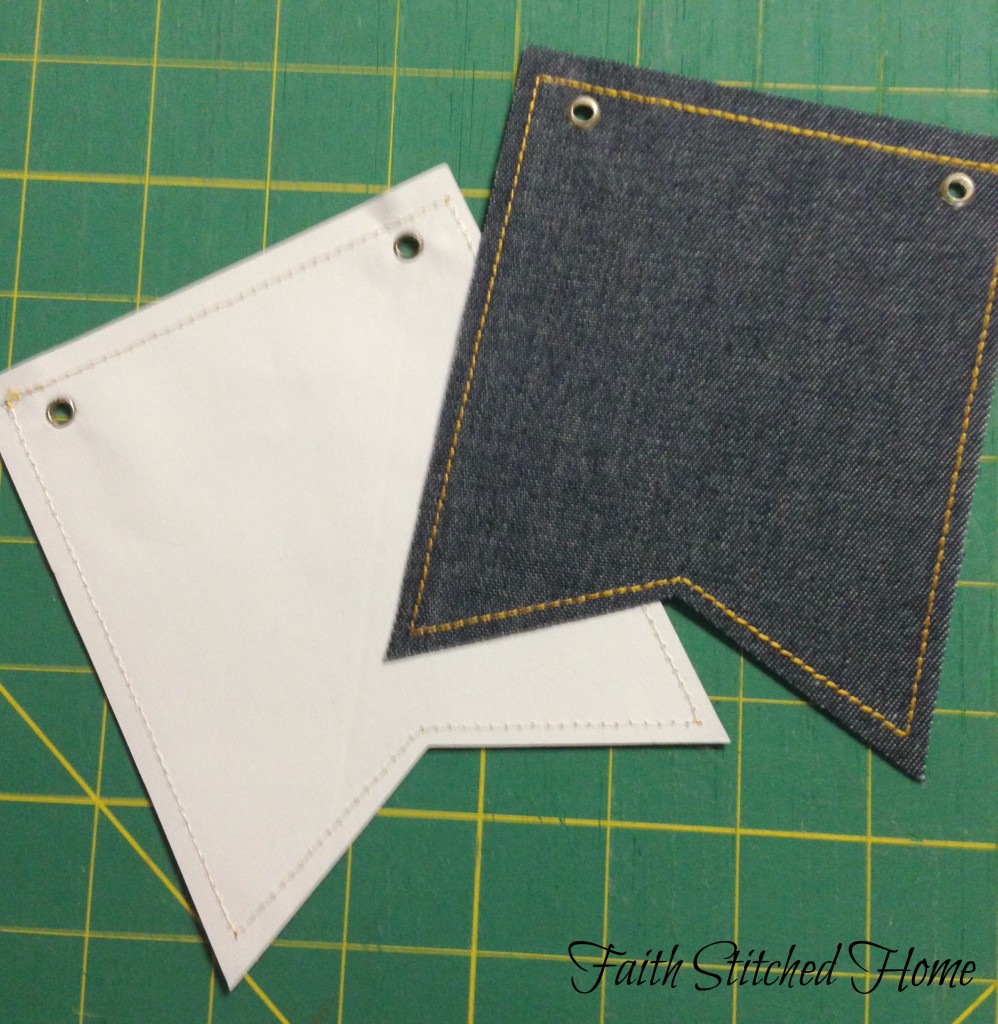 I began by opening my word program, selecting a font, and increasing the size to fit the pennant. For this project I used the font, Georgian, and increased the size to 300. 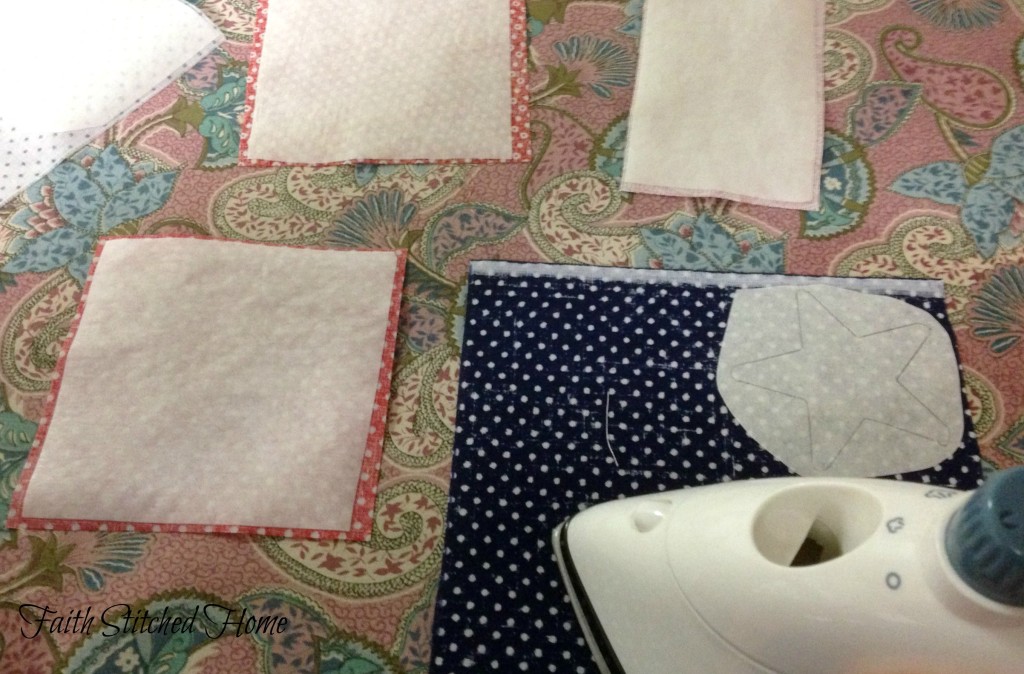 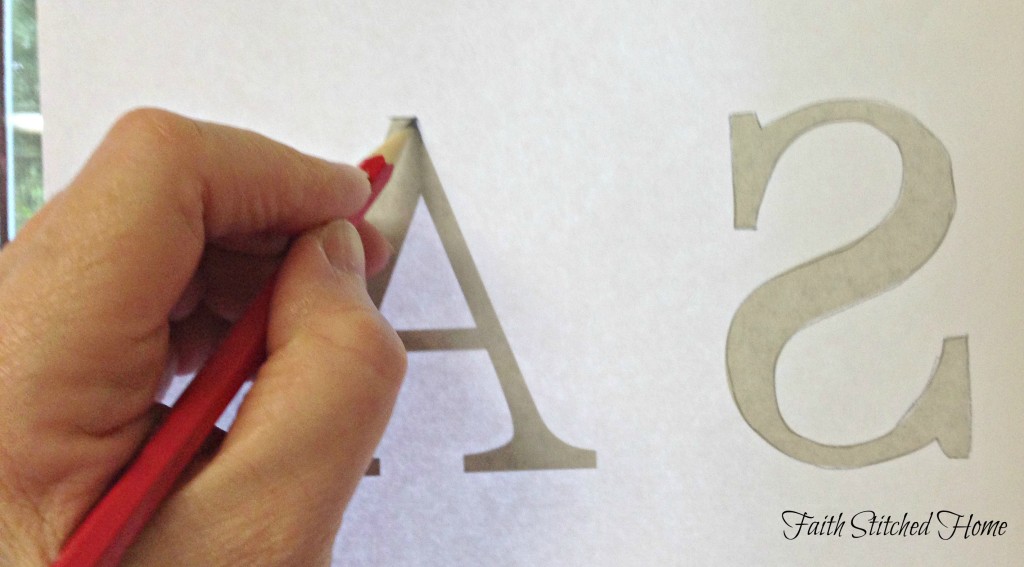 Here I have my copied letters facing against a window and using it like a shadow box, I trace around the letters on the back.  I will use this tracing to transfer the pattern onto the fusible web backing paper. 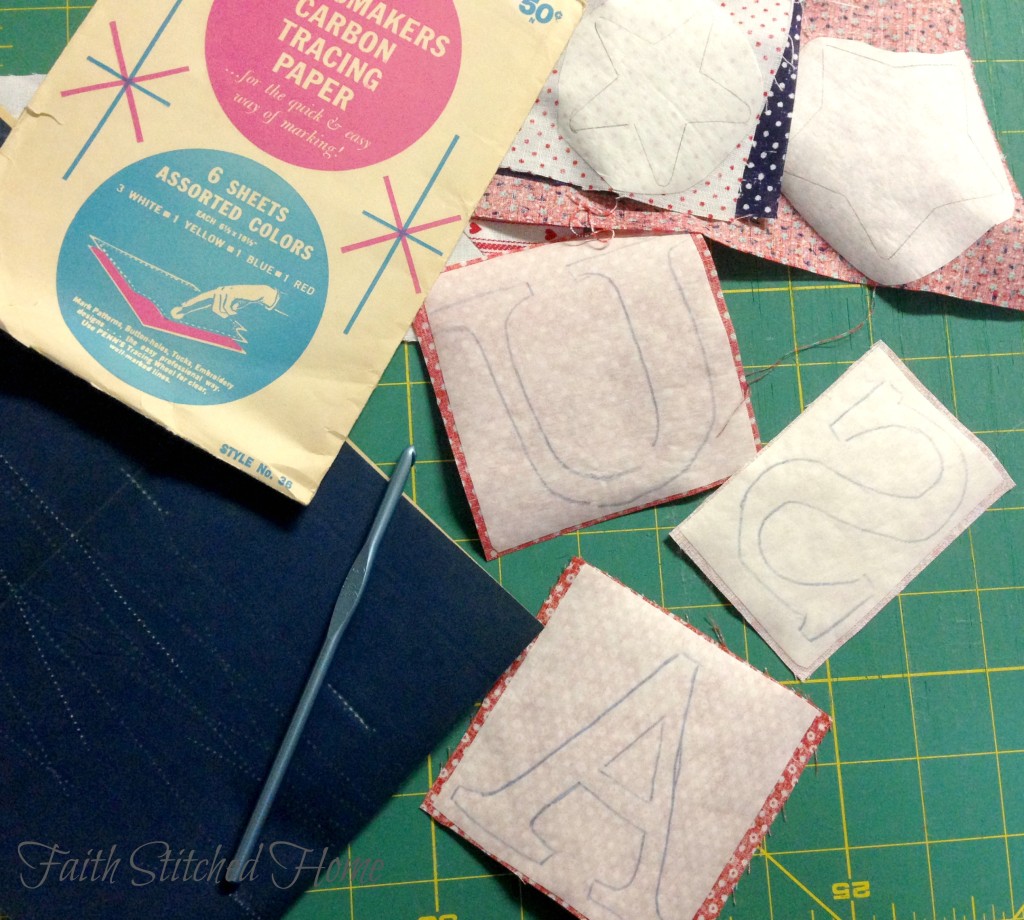 This is dressmaker tracing paper that I’ve had in my sewing supply drawer for probably 40+ years!  If you notice at the top of the envelope, it only cost me 50 cents.  That’s a lot of bang for my sewing buck!

You can see where I’ve traced darts with that same paper.

I slipped the tracing paper face down between the fused fabric and topped with the pattern wrong side up.  Remember I need to trace the letter backwards.  I used the blunt point of a crochet hook to trace around the letter. 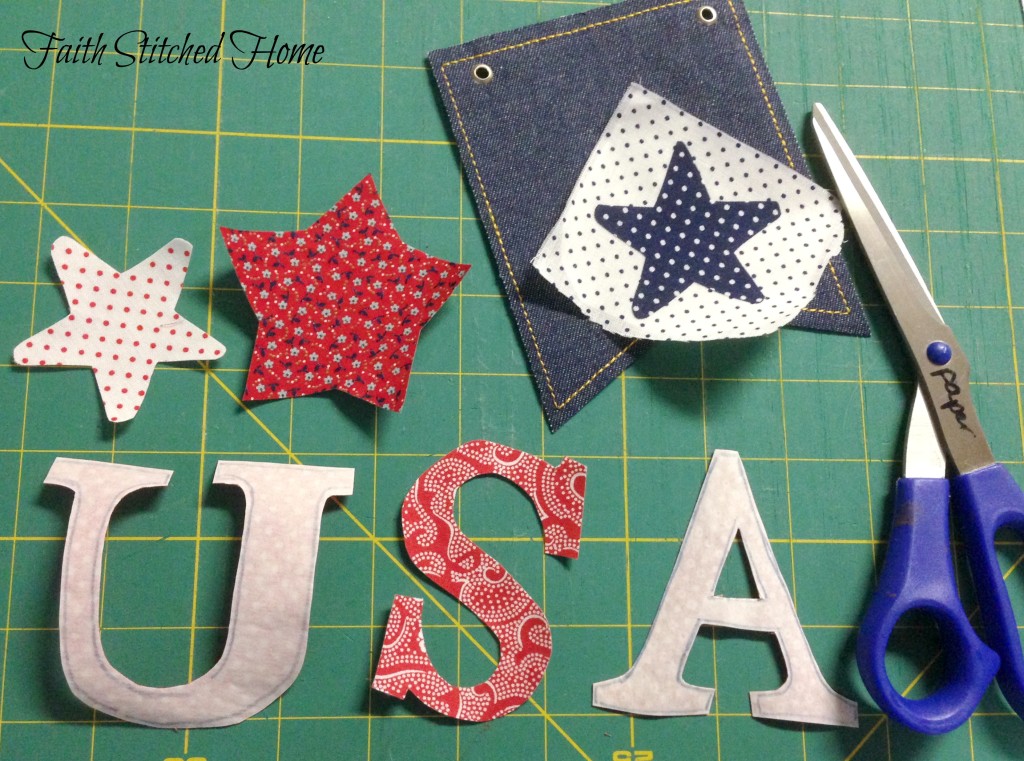 Besides the letters U, S, A, I made some star appliques for the pennants on either end.

Cut your letter out and peel off the paper backing.  Position it on the pennant and iron in place.  If I were machine stitching the applique, that would be the next step but this banner will hang above my mantle and won’t need to be securely stitched. 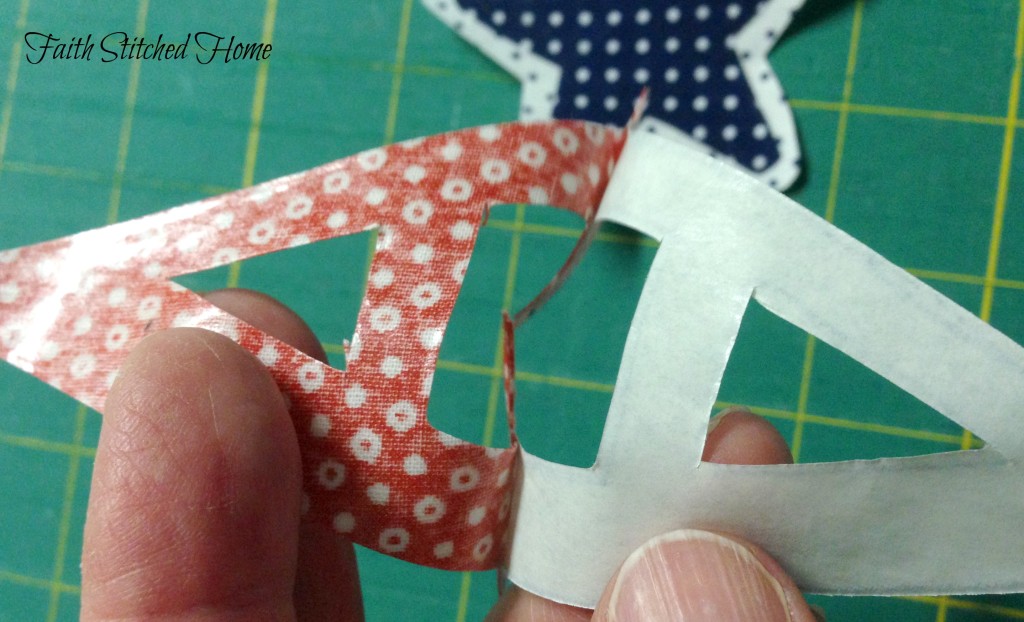 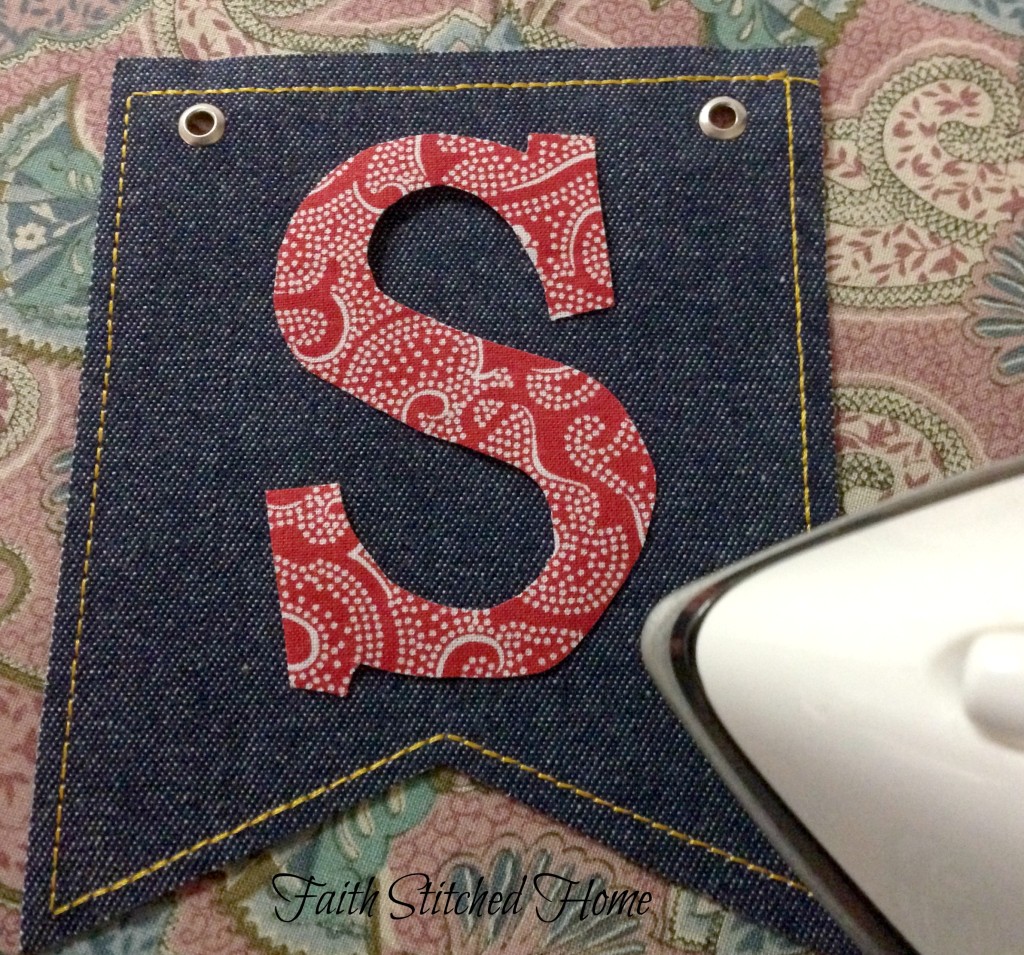 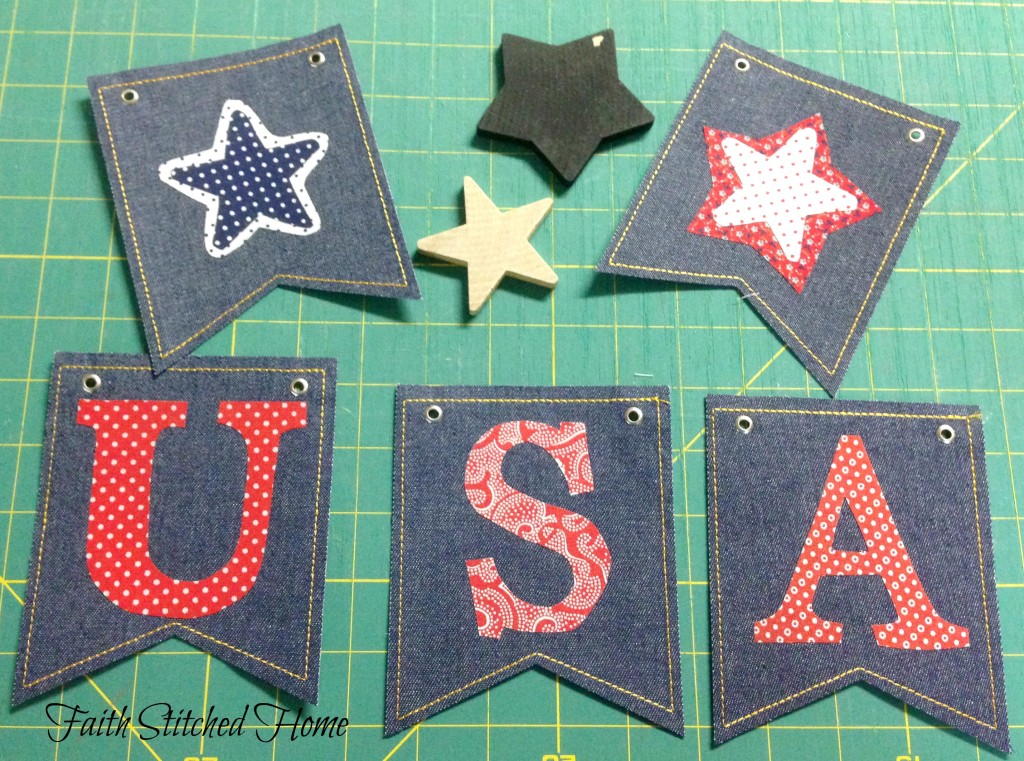 Here you can see the wood cutout stars that I used for my star pattern.

Using narrow satin ribbon, I threaded it through the grommets to hang and have it displayed across the vintage window on my mantle.

Have a blessed Memorial Day, my friends.

Please remember to say a prayer for those who paid the ultimate price for liberty.