When I decided to take the challenge to Write 31 Days, I had to consider what topic I was going to cover. The challenge is to write about one subject. My first thought was sewing but that is a very broad subject; I knew I had to narrow it down. The answer came from a good friend of mine – (Re)Purposed Sewing. 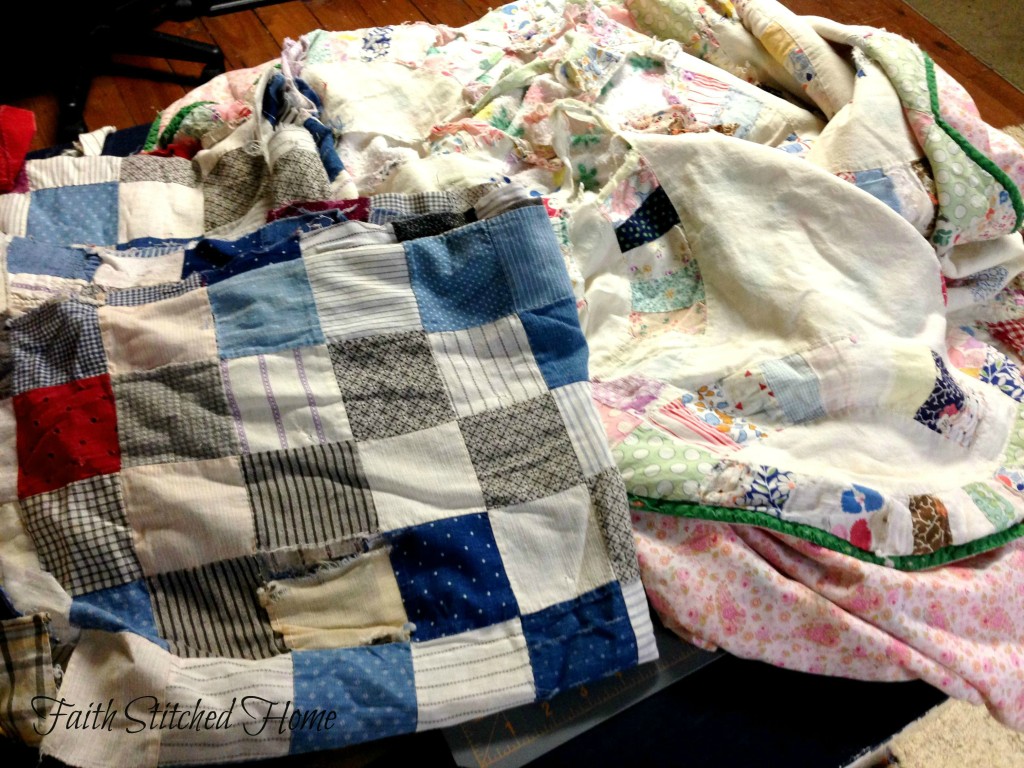 My friend, Rosalie, sparked the idea. She is always an encouraging and supportive friend and would probably never guess that she would provide inspiration for my creative endeavors.

She phoned one recent Sunday afternoon requesting to come over to ask me about something. When she arrived, her arms were filled a bundle of well worn and much loved vintage quilts. She explained that they had been passed to her by her mother years ago. The two quilts had originally been given to her parents in the beginning of their marriage more than 60+ years ago! Clearly her four, now grown (one is still a teen) children had loved the quilts to death – literally. There wasn’t much to be salvaged from them.

She asked if I thought I could do anything with them. At first I had an overwhelming feeling that she meant to repair the quilt as a whole. They were so far gone, a quilter may as well start from scratch. Much of the fabric was completely worn thin and ragged and the batting (actually old blankets) was lumpy and ratty. What a chore the repairs would be!

She went on to explain that she would like her children to receive keepsakes made from the quilts as Christmas gifts. Her directive was to do whatever I wanted. What a gift to have been given creative license to make whatever came to mind! Her trust in me is such a blessing!

Quickly the overwhelming thoughts disappeared replaced by ideas for saving bits of family history and memories for the next generation. Hence the idea for my 31 days of (Re)Purposed Sewing using fabric, thread, and some imagination to create something new from something old.

Note: The photos above are after I had removed the binding, backing, and batting.

Drop by tomorrow to see the first (re)purposed sewing project.

By the way, that is my sewing room assistant lying down on the job in the photo above. She’s totally not bothered by being caught sleeping on the job; she has 110% job security and knows she will never be fired!